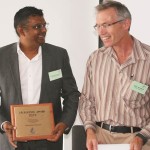 The Southern African Bitumen Association (Sabita) Award for Outstanding Achievement in Bituminous Product Technology for 2013 was presented to consulting engineer Mahendren Manicum of Naidu Consulting (Pty) Ltd at a presentation ceremony in Cape Town on 6 March 2014. The award acknowledges the excellence of his rehabilitation projects at Darnall, Main Roads P82 and P398, and also his work in assisting Aqua Asphalt with the accreditation of their warm mix asphalt programme.

This annual award traditionally acknowledges individuals who have made notable contributions to the development and/or implementation of innovative technology.

Mr Manicum’s three projects were valued at R275-million, and also earned him the 2013 SAICE National Technologist of the Year award, while two other projects managed by him won SAICE National awards. 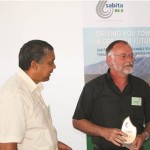 Sabita CEO Saied Solomon’s citation noted that since taking over the site, Smit’s commitment and hard work has ensured that “this site has become one of the Group’s top safety performers having recorded its last LTI on 15 August 2007 – almost 7 years ago! – This was achieved on a site that employs 17 staff and manufactures and distributes in the order of 1000kl of binders per month.”